NEW YORK (February 4, 2021) – Love is in the air, but so are financial problems. Nearly three in four (73 percent) married or cohabitating Americans say financial decisions are ever a source of tension in their relationship. Of these, nearly half (47 percent) admit this tension has negatively impacted intimacy with their partner. Intimacy issues are more often experienced by men (52 percent) than woman (41 percent), and especially for those who have children in their household (60 percent). This all according to new research conducted by The Harris Poll on behalf of the American Institute of CPAs (AICPA). 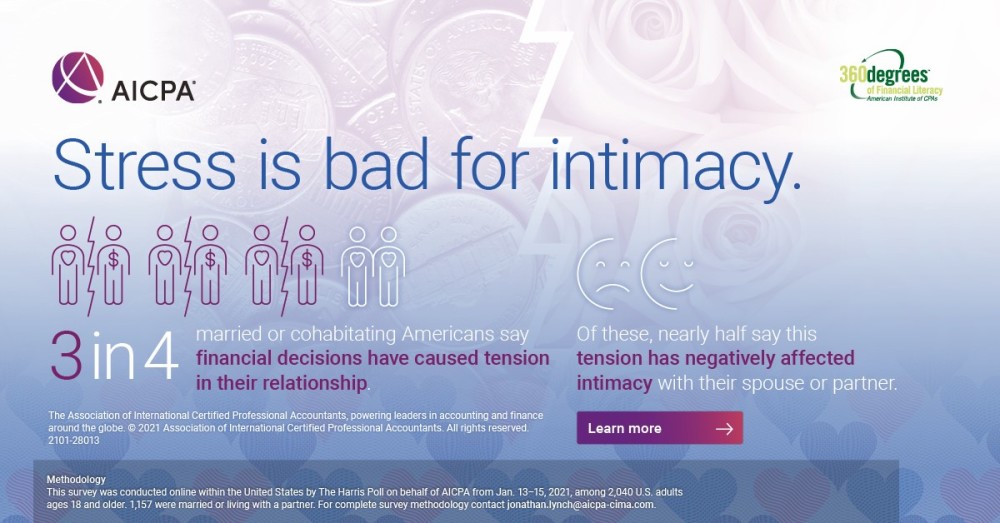 “Investing in financial compatibility early on pays dividends in the long run. If left ignored, financial stressors can tear through a relationship and ruin more than just your bank balances,” Gregory J. Anton, CPA, CGMA, chairman of the AICPA’s National CPA Financial Literacy Commission. “It’s important to talk and have a strong sense of financial familiarity in a relationship. When you share your money values and set joint-financial goals together, you help to set your relationship up for success.”

The survey found that 7 in 10 Americans married or living with a partner (69 percent) have had a disagreement with their companion about finances in the past year. Those disagreements most often revolve around needs vs. wants (36 percent), spending priorities (28 percent), and making purchases without discussing them first (22 percent). Paying off debt (21 percent) and saving for larger purchases (19 percent) round out the top 5. 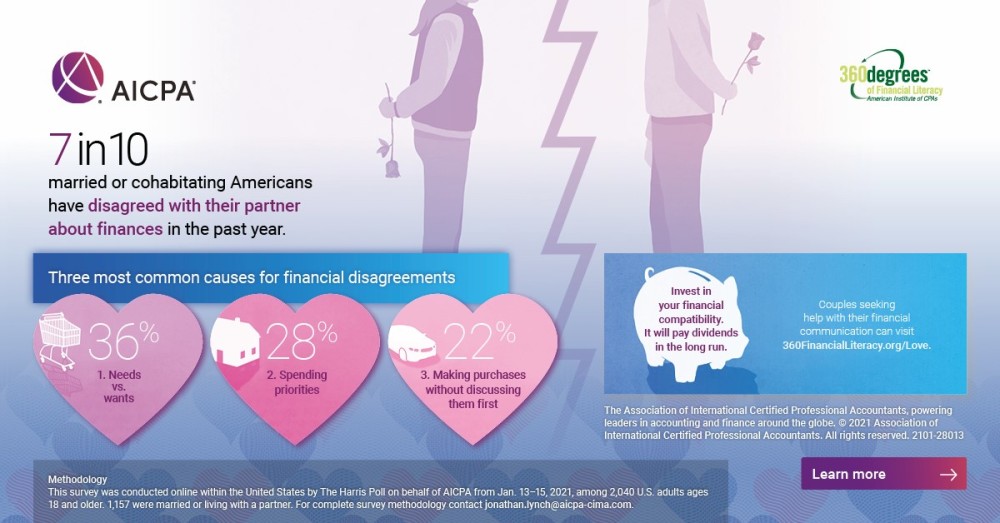 “Talking about money can certainly be uncomfortable, but candid discussions about your financial situation and goals are critical,” said David Almonte, CPA/CGMA member of the AICPA Financial Literacy Commission. “Both personal and financial benefits can come from scheduling regular financial check-ins with your partner. Discussing a shared financial outlook will not only bring you closer to your joint-financial goals but can help to bring you closer together as a couple as well.”

Only 56 percent of married or cohabitating Americans say they are very comfortable talking to their partner about finances. Lack of communication and financial problems are both common issues that contribute to divorce. Couples looking for help strengthening their financial compatibility can visit 360FinancialLiteracy.org/Love.

Financial infidelity enough for some to throw in the towel

Cheating is often cited as a major contributing factor to divorce. It may not be limited to physical and emotional affairs but also financial betrayal. Whether it’s a large amount of debt or assets that have been kept concealed or a secret bank account– financial infidelity is destructive to trust, and for some, that is enough to end their relationship. The survey found that 2 in 5 Americans who are married or living with their partner (41 percent) would be at least somewhat likely to end their relationship if they discovered their partner was dishonest with them about their finances. This includes one in five (20 percent) who would be extremely/very likely to call it quits.

Parents with children in the household having a rough time

Throughout 2021, the AICPA will be exploring the impact of COVID-19 on consumers, businesses and the accounting and finance profession through a series of surveys, reports and other content. For more information, please contact Jon Lynch jonathan.lynch@aicpa-cima.com or James Schiavone james.schiavone@aicpa-cima.com.

Methodology
This survey was conducted online within the United States by The Harris Poll on behalf of AICPA from January 13-15, 2021 among 2,040 U.S. adults ages 18 and older. 1,157 were married or living with a partner. For complete survey methodology, including weighting variables and subgroup sample sizes, please contact jonathan.lynch@aicpa-cima.com.