NEW YORK (March 30, 2022) – Almost one in four U.S. business executives said the ongoing impact of unfilled jobs had forced them to restructure staff to protect core operations or limited the pursuit of new projects or bids, according to an AICPA & CIMA survey.

A dearth of skilled job candidates had been a top concern for businesses for years before the pandemic and quickly reemerged as the recovery progressed. Business leaders list “availability of skilled personnel” as a challenge second only to inflation in the latest AICPA Economic Outlook Survey, which polls CEOs, CFOs and other senior-level CPAs and management accountants in the finance function. Top-line results of the quarterly survey were released earlier this month.

Some 82% of business executives said their organizations were having at least some difficulty with recruitment and retention, with 17% characterizing it as extreme difficulty. The latter is actually an improvement from the fourth quarter last year, when it stood at 25%.

Some 31% of survey takers said mid-level staff openings have been the most difficult to fill, while 28% said the problem is across the board. One in four identified entry level positions as the most challenging category to recruit.

While 40% of business executives said unfilled jobs have not had a significant impact on operations, a majority said the problem had manifested itself in several ways within their organizations. The most common outcomes (survey takers could choose more than one):

“We know from our survey that 57% of business executives report they have too few employees,” said Ash Noah, CPA, CGMA, vice president and managing director of CGMA learning, education and development for the Association of International Certified Professional Accountants, representing the AICPA and CIMA. “Pandemic-related trends such as the Great Resignation have complicated an already difficult hiring situation, and that can exacerbate burnout and disaffection among remaining staff if the situation isn’t managed carefully.”

To combat the tight labor market, companies have adopted a number of recruitment and retention strategies, principally higher wages and more flexible work arrangements, although the former has been driven in part by inflationary pressures. Signing bonuses are also increasing as a tactic to attract new talent.

The first-quarter AICPA Business and Industry Economic Outlook Survey was conducted from Feb. 2-23, 2022, and included 461 qualified responses from CPAs who hold leadership positions, such as chief financial officer or controller, in their companies. The overall margin of error is less than 3 percentage points. A copy of the report can be found on aicpa.org. 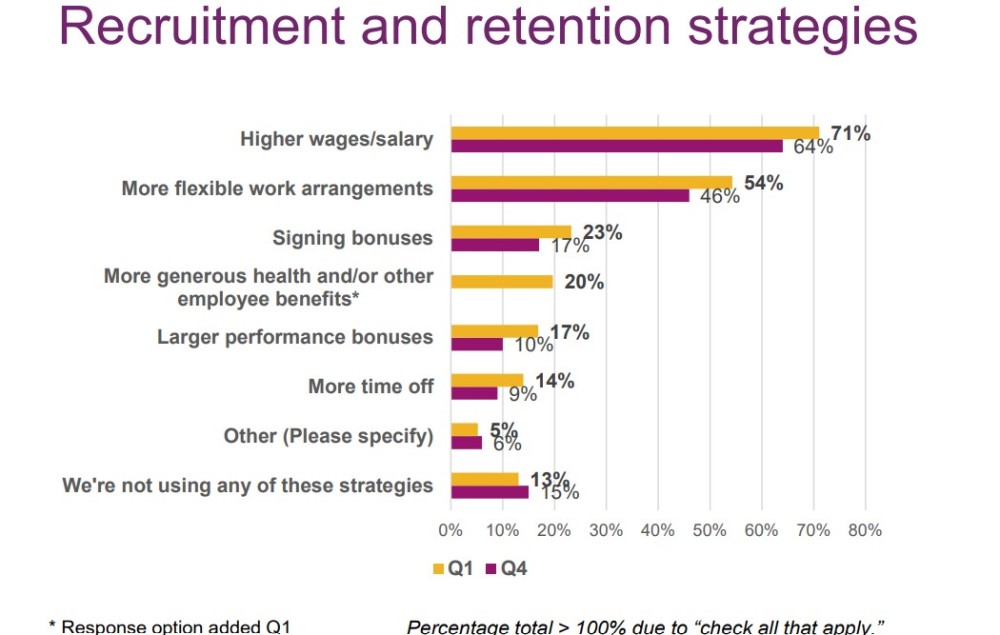